A walk of about 2 miles past fields to St Abbs village, along the cliff tops to Coldingham, then back up again. Paths are steep and narrow in places, so not wheelchair suitable.

About 10 miles north of Berwick on Tweed on the A1, you will see a right hand turn (heading North) signposted Coldingham and St Abbs on the B6438. Take this road and follow it to Coldingham. At Coldingham village, turn left at the 'T' junction, then take a right hand turn signposted St Abbs. Follow this road through the village, narrow in places, then once out of the village, up a hill heading for St Abbs. At the top of the hill you will see a small layby on the right, with room for maybe 4 cars. Park here The postcode for Hallbank, the last street in Coldingham is TD14 5NY. The walk is a short distance past here.

You can see a map of the route here.
You will see a footpath at the end of the layby, signposted 'Creel Walk' 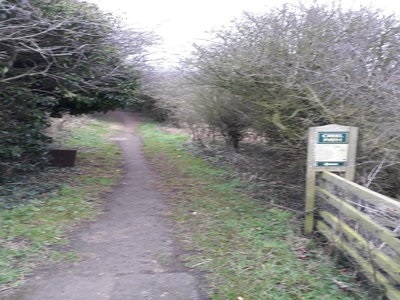 Take this path down to the bottom of the hill, then straight up the other side. 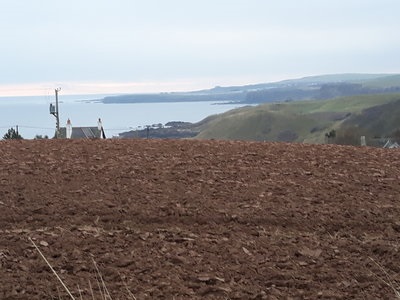 The path goes over the hill into St Abbs, with scenic views of the coast to the south. Follow this path to St Abbs. 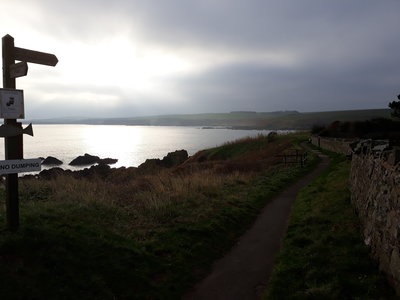 Finally, you can go right into St Abbs and explore the village, the harbour and the visitor centre. Once done, find your way up to the cliff path on the south side of the village.

Now head along the cliff path to Coldingham. After a while the path forks, with the left hand path going down to Coldingham beach. 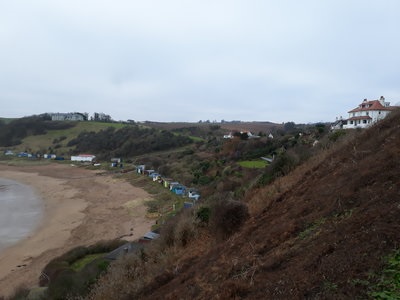 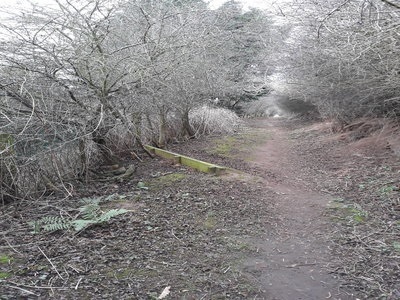 Take this path, and it brings you back to the valley at the creel walk. Turn left, and up the hill back to your car.

This story of St Abbs and Coldingham begins with Aebbe, a Northumbrian Princess and a remarkable woman from what little we know about her. Aebbe was the daughter of King Aethelfrith of Bernicia and when he was killed in battle by Edwin of Diera, Aebbe and her siblings went into exile to Dal Riata in the west of Scotland, where she converted to Christianity. There is a story that she became a nun and went into a nunnery to avoid marrying a Scottish Prince. Prince Aidan did not give in easily, he was determined to marry Aebbe, and he followed her to the nunnery and intended to carry her off. Aebbe fled to a high rock by the sea and the tide came in, cutting her off from Aidan on the shore. He waited for the tide to go out, but Aebbe prayed for help and the tide remained high for three days, forcing Aidan to recognise that Aebbe had divine protection.

After a few more regal changes, Aebbe's brother Oswiu became king and Aebbe was able to return to Northumberland, where according to the Venerable Bede she founded a monastery in Yorkshire.
Some time later, Aebbe was captured by one of the rival Dieran factions, but she escaped in a small boat down the River Humber. The boat was then guided by an angel up the coast to Berwickshire, where it landed in a natural harbour in the rocks. She then decided to found a new monastry in Urbs Coludi, which is identified with Kirk Hill on St Abb's head, the promotory to the north of the villages. Aebbe was both a teacher and a politician, bringing Christianity to the pagan Angles of Northumberland. She became so famous that she was visited by and became friends with Saint Cuthbert of Lindisfarne, which is quite remarkable as St Cuthbert would normally have nothing to do with women.
On St. Cuthbert's visit to Aebbe's monastery, he would disappear at night to bathe and pray in the cold sea, to stop himself succumbing to temptations of the flesh.

Bede called the place 'the Monastery of Virgins' and one story says that the nuns used to bathe in the sea in the bay at St Abbs harbour. They guarded their modesty by walking beside a wheeled cart, so they could get in and out of the sea without being seen. However another report says that the the nuns and monks at the monastery lead a licencious life, and the monastery was burned down as punishment. Certainly the members of early Christian communities came from noble backgrounds and so the monastery would have been a place for eating, drinking and entertainment. Apparently Aebbe found it hard to keep her flock in order and the monastery burned down in 679, was rebuilt, then burnt down again in 683, shortly after Aebbe's death.
When the Vikings arrived, the monastery was too exposed on the cliff and was plundered and burned again, so the people of Coludi, or the Coludings moved a short distance south and founded a new 'ham' or village on the site of present day Coldingham. A new priory was built in Coldingham in the time of the Scottish king David, and it became a very important religeous centre in Berwickshire. If you can get parked in the village, it is worth a look at the remains of the priory. Fishermen lived in the village, but they fished from Coldingham Shore. To get there, they used the Creel Path, a creel being a lobster pot. When the current creel path was refurbished recently, evidence was found that it was used by the monks from Coldingham priory.

Now fast forward to the 19th century, and a fishing company saw an opportunity to build a harbour at Coldingham Shore. A village was created, which developed into a busy fishing harbour. A local dignitory decided it should be renamed, and called it after the saint who founded the original monastery, so the village became St Abbs.