A pretty village walk of about 1.5 miles through a back lane behind the main street, round by Warkworth castle, then back to the car park by the river Coquet.

There is ample free parking by the river. Turn off the road opposite the Hermitage pub and follow the road round behind the Church.
Warkworth contains several pubs and cafes for that essential after walk drink. There is also a large castle and a hermitage over the river, although dogs are not allowed there.
While the route is steep in places, it should be ok for disabled access.

Warkworth is near the coast approximately 30 miles north of Newcastle on Tyne. Travelling from the south, take the A1 north out of Newcastle and turn right for Felton. As you come into Felton, turn right on the B6345 and follow that road through Acklington, then at the end of Acklington village turn left on the Morwick road.
Travelling from the north, take the A1 south to Alnwick and turn off the A1 onto the A1068 at the Alnwick bypass. Follow this road past Alnmouth to Warkworth.

Click here to see a detailed routemap of the walk. It will open in a new tab.
Starting from the car park, walk down river to the old bridge, 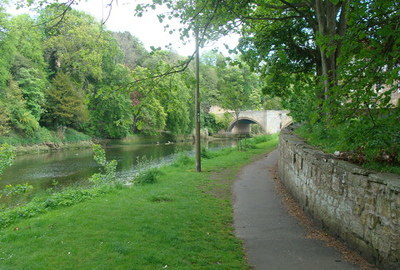 cross the main road, then go up the alleyway on the right at the end of the small park.
Follow this alley up through the village to the top of the hill, 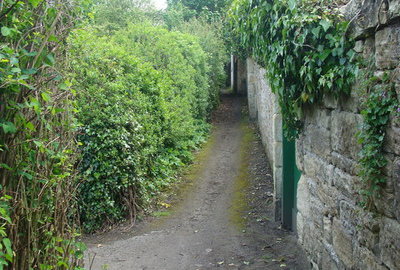 then cross the road again and go into the castle grounds at the corner where the castle meets the main street. 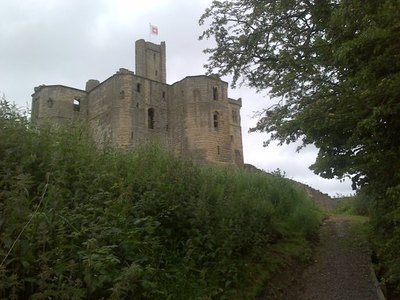 Here, you can shortcut the walk by going down to the river and back to the car park. Also, the extended walk is not really suitable for wheelchairs. If you want a longer walk, continue along the top of the river bank 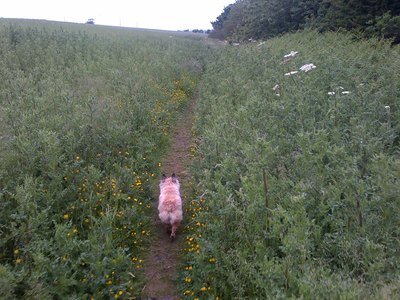 for about 1/2 mile until you reach a track, turn down the track to the river 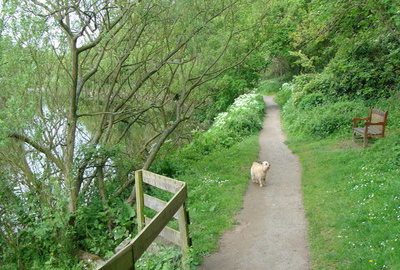 and follow the river back to the car park.

Warkworth village sits within a loop of the river Coquet, with the neck of the loop guarded by the castle on a steep hill. There is a deep ditch cut across the neck of the promontory which is probably older than the castle and used to defend an 2,000 year old Iron Age settlement.
The first historical mention of Warkworth was in 737, as "Werceworde" or The Homestead of Werce. It may have been an an Anglo-Saxon manor and it was granted by King Ceolwulf of Northumbria to the monastery on Lindisfarne

The walk starts close to the church beside the river, which is dedicated to St Lawrence and was founded by Ceolwulf in the 6th century. That wooden church was probably destroyed by the Vikings in the 800s. The stone church that stands today is Norman. In July 1174, a Scottish army under Duncan the Earl of Fife attacked the village and 300 villagers tried to find sanctuary in the church, but were massacred there.

The old bridge over the Coquet was built about 1380 and was still used by all traffic until 1965. I can remember my Father driving over it. The tower on the southern end was intended to guard the village against the Scots, and it is the only surviving fortified bridge in England. 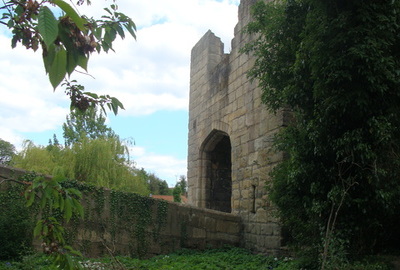 When you leave the bridge and go up the alley way, you will notice a lot of long and very attractive gardens on both sides. These gardens reflect the unchanged medieval street plan of the village and are known as the Stanners on the west side of the village, and The Butts on the east.

As you come out of the alleyway at the top of the hill you will see the castle. Warkworth castle was probably built on the site of a previous Anglo-Saxon manor house, and might have been originally built by Henry the son of David I, King of Scotland in 1139. We can be more definite in 1157, as that was when Henry II repossessed Northumberland for the English crown as he granted the castle to Roger fitz Eustace. The castle was not very strong and was sacked twice by the Scots, until in 1328 the village and castle were given to the Percys, who rebuilt and developed it into a strong fortress.

Old Warkworth records state that the village used to have a pilot and a customs officer, which leads a lot of people to wonder if Warkworth was once a port. At present, the River Coquet reaches the sea a little more than a mile south of Warkworth at the port of Amble. The river used to reach the sea near Warkworth until its course was changed by heavy rains and storms in 1764.

Andrew Armstrong's map of Northumberland, published in 1769 shows the old course of the river heading South of the current course, then doubling back Northwards and reaching the sea beside Warkworth. There is still some evidence of the old river bed today. The river most likely ran past Amble marina down to the dry channel known as 'the Gut', before heading North again and going up the estuary side channel that still exists today between Warkworth caravan site and the sea. So in other words, the river did not run directly from Warkworth to the sea, but ran South for about a mile, then doubled back North for another mile before heading East to the sea. Ships would not moor at the river mouth, but would go up the river a way to escape fom the sea waves. The harbour at Amble is called 'Warkworth Harbour', which suggests to me that the ships moored at or near the point where the river doubled back on itself. If anyone still likes the idea that sea going ships could moor under the walls of Warkworth Castle, then in June, 1591, there is a record of a ship driven ashore at the mouth of the Coquet, and some of the report says.

'Maye yt please your lordship to be advertised that upon Sundaye at night last there was a pynnis dryven in at Cockett mowthe, ... whereupon I cawsed the said shipp to be seased upon and brought as nighe unto Warkworthe as any water would serve withall, which said shipp was furnished with beare and biscatt and other victualles and nothinge elles of any value except two mucatts and some other fyve or vj small peeces, and therupon I have cawsed the sayles and other impliments of the said shipp to be brought and layed up in your honor's castle of Warkworthe'

Down by the river again, you will see signs for the hermitage. This can only be accessed by a boat trip to the other side of the river and is well worth a visit, but unfortunately dogs are not allowed. The legend is that Bertram of Bothal's betrothed, Isobella of Widdrington, was kidnapped by the Scots. While trying to rescue her, Isobella and her brother were accidentally killed. The distraght Bertram vowed to become a hermit in penance for her death, and built the hermitage in her memory.
The historical fact is that it was created by Henry Percy II about 1340 as a chantry chapel.