Swarland is a small village just off the A1, near Alnwick

A long walk through woods, down hill to a stream and back up hill, that takes about 2 hours. Some of the images below show the walk just after an overnight snowfall, but snow cannot be guaranteed. You will find a cafe on the walk, a social club and poo bins.

Postcode for Satnav - NE65 9BQ. This is the post code for Nelson's Cafe and so for the car park. Heading north up the A1 about 10 miles from Morpeth you come to a dual carriageway.. A further mile up this carriageway, take left hand turn signposted Swarland. Drive past Nelson's monument on your left, then turn left again up a hill. Near the top of the hill you reach a crossroads. Turn left again and follow the road until you see Nelson's cafe on the left, turn in here, into the car park.

Heading south down the A1 about 7 miles from Alnwick you will see a crossroads signposted left for Acklington and Guyzance and right for Swarland. Take the right turn, then an immediate left at the 'T' junction, and after about 500 yards you will see a right hand turn signposted Longframlington and Swarland. Turn up here and you will come to the crossroads near the top of the hill described above.

Click here to see a detailed routemap of the walk. It will open in a new tab.
Coming out of the car park, turn right and walk over the main road, past the lodge, up to the old Golf club, and into the forest. Just past the entrance to the forest there is a path off to the left with a notice board describing Swarland Hall. Take this path, which is mainly built on the old carriageway which lead to the Hall, follow it to the bottom and then turn right.
This path runs past an old animal shelter, then between a small wood and fields. The path then enteres the woods again, with a small fence at the end. Turn left here and follow one of the winding paths down through the birch woods and right down until you join a larger path.

Now keep following this path along and down, until you reach Swarland Burn. Follow the path to the right along the burn, and eventually it climbs up steeply away from the burn. The forest is used for rough cycling and there is a maze of paths back up through the woods. In general, keep left and keep climbing, and eventually you will come back to the footpath which runs crossways through the woods. When you find it, turn left and uphill.
Follow this path around and it gets steadily wider until it becomes a forest track. After some distance, it turns sharp right, then right again and winds back on itself. At this second right turn, you should see a small pathway off to your left. Take this path and follow it until you reach a fence, turn right, then follow it uphill until you reach the caravan park. At the caravan park, turn right again.

Now the main path follows a greenway which runs between the forest and the golfcourse, but this greenway can be very boggy. There is an alternate path in the woods, which more of less follows the greenway but winds about through the trees. The forest path is arguably more attractive, and certainly drier. So follow the greenway or the forest path along on the level, until you reach a crossroads. Turn left and follow the main trackway, with the golfcourse on your right. This track goes back into the woods for a short distance, then emerges back by the golf club and your car. 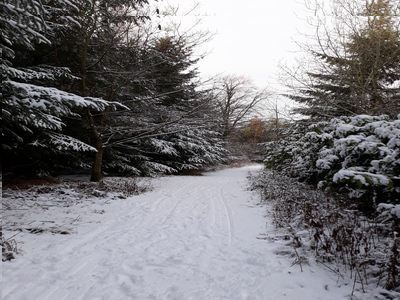 ❮ ❯
Behind the site of Swarland Hall

200 years ago there was no Swarland village, just a large country house called Swarland New Hall and some estate buildings. The hall is long gone, but some of the estate buildings remain, for instance North lodge and Home Farm cottages.
Alexander Davidson, who was a friend of Lord Nelson, bought the hall in 1795. He planted trees in groups in Swarland Park, to make out the positions of ships in Aboukir Bay, the battle of the Nile. When Nelson was killed at the battle of Trafalger, Davidson built an obelisk now called Nelson's monument, beside the original A1 road to the east.
The hall itself fell into disrepair and was eventually demolished in the 1930s. If you look in the woods behind the golf club, you might just see the odd stone or brick in the undergrowth, but there is very little left.

The estate was bought by Commander Clare Vyner shortly later. Vyner was a well known philanthropist in the 1930s. He also owned Fountains Abbey in Yorshire and set up the 'Settlers Society' to help boys from deprived areas in Tyneside to escape the poverty of the Great Depression. He then extended this scheme to Swarland, and built a new village of 77 cottages on estate land to the north, beside the avenue of trees. Each house had several acres of land, and they were intended to be lived in by unemployed families from Tyneside, where they could work the land and be self sufficient. While most of the Settlers soon moved back to Tyneside, the original houses are still called the 'Settler's Cottages'. Much of the land has been sold off for development in recent years, and some of the cottages demolished. Most of the rest have been extended, and the flat roofs converted to gable, but you will still see three or four of the original flat roofed houses in the village.

Swarland does have one claim to fame. Northumberland is famous for its vegetable shows, especially leeks. Every year the gardeners in the towns and villages compete to see who can grow the largest leek and the prizes for the best leek could be quite substantial. Every miner's welfare club had its leek show. There is a social club tucked in behind the village square in Swarland, and the first recorded leek show in North East England was held there in 1846.