A walk of approximately 4 miles up the river Tyne from Hexham to the point where the South and North Tyne rivers meet.

Through a town park, along a path by a railway line, then along small paths by the river Tyne. The first part of the route is disabled friendly, but not the river walk. Should be safe and suitable for all sizes of dogs.

Postcode for Satnav - NE46 1XS - This is the post code for the canoe club at the start of the parking area.
From Newcastle, take the A69 Carlisle road and follow it for about 21 miles to the Hexham turnoff. In May 2021 there are roadworks at this turnoff, for construction of an underpass for through traffic. Turn left at the top of the exit and follow this road downhill to the bridge over the Tyne. Cross the bridge then turn right at the roundabout and follow the signs for Tyne Green country park, where you will find ample parking.
You can, of course, use public transport to get to Hexham, then walk down to this park from the town.

Click here to see a routemap of the walk. It will open in a new tab.
Walk over to the river from the parking area, then follow the wide pathways up river through the park. It might be an idea to keep your dog on a leash on this part of the walk, as it can be popular. Walk right to the end of the park, then follow the narrow pathway that runs alongside the railway line, popular with cyclists. After a short distance you will see steps on your right that lead down to a river path, and this path is much more dog friendly.
Follow this path over a foot bridge, under the main road bridge, then right up river until you come to the South Tyne 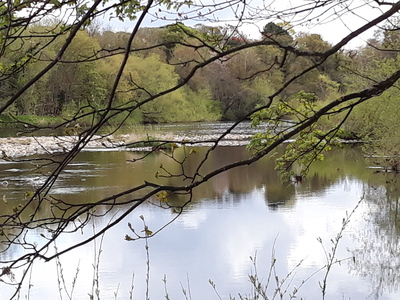 A short history of Hexham

While the Hexham is close to the Roman wall, and the area has been inhabited for thousands of years, there is no evidence that the town existed in Roman times. The name Hexham is probably Anglo-Saxon in origin, and first appears in records when Saint Wilfrid founded an abbey in 674. This abbey was one of the first in England that was built from stones, plundered from the Roman Wall just to the north. The original 1,450 year old crypt still survives and you can see it below the abbey today, complete with Roman inscriptions on the stones.
This Anglian settlement was destroyed by the Vikings 200 years later.

The Normans rebuilt the abbey in the 12th century, then it was sacked several times by Scottish invaders, most notably by William Wallace and King David II. The Abbey was rebuilt or repaired after each invasion and is well worth a visit today.