Duddo Stone Circle, about 7 miles west of Berwick and close to the border.

Not much in the way of exercise for your dog, a short walk of less than a mile. However the visit to a 4000 year old stone circle, Northumberland's 'Stonehenge' makes it worth while. No facilities on route and the walk is not for the disabled, probably not baby buggies either.

Postcode for Satnav - TD15 2PS.
The easiest way to get to Duddo is from the A1. Heading North, just before you get the Berwick you cross a roundabout with a turnoff for Scremerston. Continue past this roundabout, then take the B6354 on the next left, signposted 'Duddo'. Coming from the North, cross the Tweed, continue on the A1 over the roundabout then take the next right.
From A697 in the West, take the Ford turnoff just North of Millfield, then turn left at Ford Village.
Assuming you are coming from the A1, drive through Duddo and you will see a sign for 'Stone Circle' on the right by a village green. Take this road and after about 250 yards you will see a gateway on your right. You can park on the grass verge here.

Click here to see an OS routemap of the walk. This opens in a new tab.
The walk is easy. Go through the gateway and follow the farm track past the first field. After a couple of hundred yards you will see the stone circle on a hill ahead, like a crown of broken teeth. Now take a less well defined track by the next field, then finally a track through the middle of a field to get to the top of a small hill.
The sun was trying the break through the clouds as we walked by the fields, but as we arrived at the circle on a typically changeable Northumbrian summer day, it started to rain heavily. We checked out the stones and the view. I could just about make out the Eildon Hills at Melrose through the driving rain. We walked a short way west to a notice board by a fence that described the circle, then came back to the stones again and decided enough was enough. About 100 yards down the hill, the rain suddenly stopped and all was dry again. Maybe the old Gods were telling us that we were not welcome. 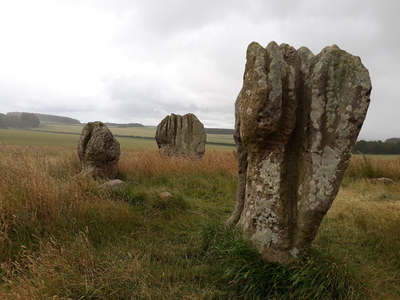 The Duddo Stones have had a few names over the years. "Duddo Four Stones" "Duddo Five Stones" "The Women" and "The Seven Turnip Pickers". The first two names are easily explained, as one of the stones fell over in the 19th century, and was dragged to one side so a plough could pass over the hill. That stone was re-erected sometime after 1903. The stones are narrower towards their bases, which might explain The Women, but the Seven Turnip Pickers is intruiging. There is no written record of 7 stones, but the site was excavated in the 1890s, when 4 stones were standing, and that excavation indicated that 6 stones had stood there. This excavation also revealed a pit in the centre of the circle, containing bone and charcoal.

One report from the early 1800s states that there are ".. six rude stones or pillars placed on the summit of an eminence, in a circular order, forming an area of ten yards diameter. The largest is about eight feet high. They are known as the Duddo Stones, and some learned archaeologists have set them down as Druidical; but the local tradition is that they were placed where they stand in commemoration of a victory gained at Grindon, in the year 1558, by the Earl of Northumberland and his brother Sir Henry Percy, over a plundering and burning party of Scottish horse." One option is out by about 2,000 years, the other by 3,500 years.
Another report from a little later states "On an eminence in the middle of a field a mile north west of Duddo stands a time and weather worn memorial of the Druidical period. The temple or whatever it may have been, has been of the usual circular shape, surrounding at intervals a plot of 36 feet in diameter. Four stones alone are standing, the tallest of which measures 6 feet 9 inches in height, by 13 feet in girth: a fifth is extended upon the ground, In a broken state, the rest have been removed. The remains of an outer circle were a while ago discovered at the usual distance". An intruiging report reflecting the Victorians obsession with the Druids. There is no sign of an outer circle now.

The latest excavation in 2008 revealed that there was originally 7 stones, 2 have been removed. So "The Seven Turnip Pickers" is obviously a very old name from the time when all 7 stones were intact. This excavation also proved that the stones were 4,000 years old, and the human remains in the centre were placed there about 300 years later. Just to put this into context, 2,000 years ago the Romans were travelling North up a road that they build about 5 miles to the east. At that time, these stones were already 2,000 years old. The deep erosion channlels on the stones testifies to their age.
So what was the circle for? No-one really knows for certain. This ring is on a commanding hilltop with views over the Tweed valley, right to the Eildon Hills at Melrose, and also the big fort at Yeavering in the Cheviots. It may have been some sort of a solar calendar, or maybe just a meeting place for the locals.