2 walks, one short and one longer by the river Tyne at Corbridge near Hexham.

A walk along a riverside path from a pretty village. Cafes, shops and puibs in Corbridge village, Poo bins on route. The short walk and parts of the longer walk are disabled friendly, and safe for all sizes of dogs.

Postcode for Satnav - NE45 5AR - This is for Station Road opposite the car park.
Corbridge is on the north bank of the Tyne, but the best place to park is the large village car park on the south bank. Coming from Newcastle, follow the A69 Carlisle road for about 18 miles until you reach A68 roundabout, and take the second left on the roundabout, on the B6530 for Corbridge. Follow this road into the village centre, turn left at the Angel Inn, follow this road over the bridge, and the car park is on your right.
Coming from the west, turn off the A69 at the Stagshaw Road junction, turn right onto the B6529, and follow this road into the village centre, where you will see the road heading south over the bridge.
You can, of course, use the bus or train to get to Corbridge.

Click here to see a routemap of the walks. It will open in a new tab.

Walk 1. Cross over the bridge into Corbridge, then take the footpath on the left leading down to the river and walk up river. Alternatively, you can go into the village itself, turn left at the Angel and walk into the village square. Go round past the church, bear right, then you will see a narrow dead end road on your left, which leads down to the river walk. Walk up the river until the path ends by a house.
You could turn right here and follow the path past the house, then up the trackway to a main road. Turn right onto the road, and the Roman visitors centre is down on your right.

Walk 2. Stay on the south bank of the Tyne and follow the paths up river. Three paths run in parallel for much of the walk, the most interesting for dogs is nearest the river, the easiest is farthest away. About 800 yards upriver you will see a stone wall, the remains of the old Roman bridge over the Tyne. Assuming you are on the river path, after about another 500 yards you reach the point where the Devil's Water joins the Tyne. Turn up the Devil's Water and follow the path up to the railway line, where you have to cross carefully, watching out for trains. Another 200 yards, and you reach Dilston Bridge.
Now you have a choice, you can retrace your steps, maybe taking the easier path back, or you can turn left and follow the road back to the car park. The road is quite busy, and so is not ideal for dogs, but the pavement is also quite wide, and the road takes you directly back to the car park. 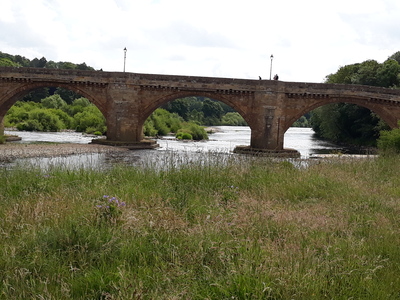 ❮ ❯
The bridge over the Tyne

The Romans built Dere street, a road from Eboracum or York, to the Antonine wall in modern central Scotland. This road crossed the Tyne at bridge built just upriver from Corbridge. The Romans had another road, the Stanegate, that ran just below Hadrain's wall, and the Romans had a settlement, called something like Corstopitum, where the two roads met. Dere street. The settlement was called Coria locally, hence Coria Bridge. Coria was the most northerly town in the Roman Empire. The first Corstopitum fort was built around AD80, 60 years before Hadrain's wall was started. Initially a major supply centre for Roman forces in Scotland, it became a legionary base serving the whole eastern half of Hadrian's Wall once the Antonine wall was abandoned.
The neighbouring civilian setllement grew in size and was an important Roman town until Rome withdrew from Britain, with warehouses, markets and granaries.

The Saxons built their settlement of Corbridge just east of Coria, where the river Tyne was easily fordable. Take a look over the bridge and you will see how shallow the gravelly river bed is still today. Enough of the Roman bridge must have survived to give the village its name. The Saxons 'repurposed' the stones from the Roman site for their buildings, most notably St Wilfred when he built his cathedral in Hexham. Corbridge was one of the capitals of Northumbria. All that survives of the royal town is parts the west tower in St Andrew's church.

Corbridge was granted a charter for a weekly market by King John, and it became a wealthy town where livestock from all over the county were bought and sold. That all changed with the Anglo-Scottish wars, when Corbridge was raided and burned several times by the Scots, including William Wallace and Robert the Bruce. Todat it is a large and pretty village and well worth a visit.