A hidden stream and an old railway walk, just on the outskirts of Alnwick.

The walk starts near the entrance to the the Aln Valley Railway, a small museum site where you can see old steam engines in action. The walk itself has no facilities, other than woods, a small stream and an old railwayline. The walkway is quite easy, apart from a stretch in the middle where you climb up an embankment to the old railway.

For Satnav, the postcode for East Cawledge Farm is NE66 2HB.
Coming up the A1 from the South, take the Alnwick exit, then turn right at the roundabout back under the A1. Turn right again under the bridge, then left into the Lion industrial estate.
Coming from the North, drive past the first Alnwick turn off, then take the second one, signposted 'Services, Industrial Estates, Hardy's fishing tackle museum', turn left before you go under the bridge, then left again into the Lion industrial estate.
Drive to the very end of this road, turn left then park somewhere by the roadside. This part of the estate is very quiet.

Click here to see a detailed OS routemap of the walk. It will open in a new tab.
Head down what is now more a dirt track than a road towards the Aln Valley Railway, but turn right up to East Cawledge Farm, which is a caravan club site. Just as you reach the farm. bear right down a grassy path and down through a dark fir wood. This leads you down to a bridge over Cawledge Burn. Cross the bridge, and follow the old trackway which runs above the south bank of the stream, all the way until you come to a gateway into a buttercup field.
Walk along the edge of the field until you come to the remains of another gateway, then follow the rough path back down to the burn again. Keep walking and eventually you will see an old railway bridge under the burn.
Now you need to get up to the railway. Before you get to the viaduct, cross over the smaller burn and follow the path up and around to the railway. It is no longer possible to get to the path from the North side as the railway line was extended down past the viaduct in 2019.
Once you reach the railway, head back uphill towards Alnwick on the fenced off footpath on the south side of the railway. However the wire netting does not extend right to the ground and it would be easy for a small dog to get under it and onto the railway track, so a leash is advisable. At one point a farm track veers off to the left, while the railway continues betwen muddy banks. Follow the farm track and it will lead you to the railway museum entrance, then back to your car. 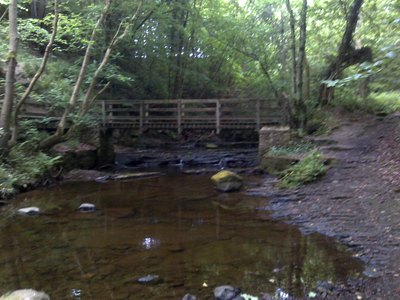 ❮ ❯
The bridge over the burn

The original branch line to Alnwick opened in 1850 and was still running steam engines in 1966 before it closed in 1968. In 1995, the Aln Valley Railway Society was formed with the intention of reviving the line. As the old station in no longer accessible (in fact it's a large, second hand book shop), a new station has since been built in a field on the east side of the A1 and the plan is to re-establish the old line right down to Alnmouth. At present, you can visit the new station and see a collection of old steam and diesel engines. Now the railway track is restored, there is a footpath beside the track.