Bamburgh Castle on the coast between Alnwick and Berwick

A beach walk beside a large, dog friendly castle. There are cafes and toilets in Bamburgh village.

Postcode for Satnav - NE69 7DF.
Bamburgh is on the coast, just east of Belford. Heading north, you can take the Seahouses turn off north of Alnwick, follow that road right through Seahouses, then 2 miles north up the Bamburgh. Heading south, turn off at Belford and follow that road into Bamburgh.
It is possible to park in Bamburgh village, but it is usually really busy in the holiday season. There is a pay and display cark park just south of the village, and it is possible to park for free in various places by the road down the Seahouses.

Click here to see a detailed OS routemap of the walk. This opens in a new tab.
Assuming you start from the village car park, head over to the castle and walk round it clock-wise. At the northern end of the castle you will see a path that takes you through the dunes and down to the beach. Head down this path and then walk down the beach as far as you wish. You will eventually get to Seahouses if you walk far enough, where there are a number of cafes and pubs.
When you have walked far enough, head back and you can either retrace your steps, or head into the dunes south of the castle where you will find a number of more difficult paths that take you back to the road again.

The steep basalt crag on which Bamburgh Castle site once held a Roman beacon, possibly part of the Saxon Shore warning system. When the Romans left, it became a Celtic fort called Din Guarie. Ida is considered to be the first Anglian king in Northumberland, and he took Din Guarie around 547 AD, along with Lindisfarne and part of the coast. This early kingdom was attacked several times by the Romano-British, and just managed to survive until Ida's grandson Aethelfrith became king. He renamed Din Guarie as 'Bebbe's fort', or Bebbasburgh, after his queen, and that name survived the centuries to morph into Bamburgh. Aethelfrith expanded and stabilised his Benician kingdon westwards at the expense of the British, then merged with Deira in the south (modern day East Yorkshire) to form the kingdom of Northumbria.
Bamburgh became especially important and well known during the reign of his sons, Oswald and Oswiu, who brought monks from Iona to preach Christianity to the area. Recent excavations in the dunes just south of the castle have exposed a 7th century graveyard dating from this time, with some skeletons believed to be the elite residents at Bamburgh. Quoting from the Bamburgh Research Project, "It is particularly exciting to realise that some of those buried at the Bowl Hole may have heard St Aidan preach with King Oswald, translating his words from Gaelic into Old English, just as Bede described. "
Bamburgh was attacked and destroyed by the Vikings in AD 993, then rebuild as a medieaval castle by the Normans. The castle eventualy became a ruin, until it was bought by Sir William Armstrong of Cragside fame, who rebuilt it as the family home, in the form it has today. The great keep is more or less Norman from about 1120, but the rest is an early 20th century interpretaiton of what they thought a castle should look like

I briefly mentioned above that Bamburgh was named after queen Bebba and we don't know much more than that. Bede twice says that Bamburgh was named after a queen Bebba, without saying who's queen she was. The Historia Brittonum expands on this a little bit, "(Aethelfrith) reigned twelve years in Bernicia, and twelve others in Deira, and gave to his wife Bebba, the town of Dynguoaroy, which from her is called Bebbanburg." Now Bamburgh was an important and formidable stronghold, so Bebba must have been a very remarkable woman to have been given it, and then for her name to still be remembered hundreds of years later. The following is not history, but an attempt to create a story that fits the facts as we know them, and so try to capture something of the life of this queen.

Bebba was a Pictish princess, and was married to the Anglian prince Aethelfrith around 589 AD. This was a dynastic marraige, a way of cementing relations between two kingdoms. A year later, Bebba produced Aethelfrith's first son Eanfrid, then in 593, Aethelfrith became king of Bernicia, the most northerly Anglo-Saxon kingdom. For the next 12 years, Aethelfrith extended his kingdon west and north into the 'North Wales' areas, maybe helped by his Pictish in-laws further north. Then, around 605 AD, he saw his chance to extend his sway south into the Anglian kingdon of Diera, by marrying a Deiran princess Acha. Assuming Bebba was 15 when she was married (and that Eanfrid was her first child), she would have been about 30 years old by now. It is not too unreasonable that Bebba was unhappy about being supplanted by a younger woman, or that Aethelfrith would be spending more time in the south. For example we know he fought a battle at Chester. Recognising that Bebba was a strong and resourceful woman, he gave her his chief northern fortress and renamed it Bebbasburgh in her hounour. This may have been partly as a compensation for Acha, and partly a desire to ensure that the north was in safe hands. At 14 years old, his son Eanfrid was probably too young for the job.

Another 12 years pass by, and Aethelfrith is killed fighting a Midlands confederation and Acha's brother Edwin takes the Northumbrian throne. Queen Acha has several young children, including 12 year old Oswald and 4 year old Oswiu, so to protect them she flees north-west to Iona in Scottish Dalriata. Now the histories list several sons of Aethelfrith but do not say much about daughters. In fact, they mention only one daughter, Aebbe, who's story is discussed in the walks near St Abbs Head. The name. Aebbe is very similar to Bebba. Aebbe was about 1 year old when her father was killed, and Bebba would have been about 40. While Aebbe is generally thought to be Acha's daughter, could she have been a late child for Bebba?
Bebba's son Eanfrid is now 26 years old and has no need of his mother's protection. He heads north to his mother's people in Pictland, where he marries a Pictish princess and they have a son, who becomes Talorgan I a Pictish king.

So what happeed to Bebba? We know that Bamburgh was a strong fortress that was difficult to take. Penda reached the gates of the fort but failed to take it in the 650s. It is tempting to think that Bebba remained in her fortress and defied Edwin, maybe for the entire 15 years of his reign, as there is no record that Edwin ever held court there. Could she have survived until her son Eanfrid, then her step son Oswald reclaimed the throne? By then she would be a matriarch in her 50s and respected enough that her stepsons did not try to rename the fortress and northern capital that bore her name. 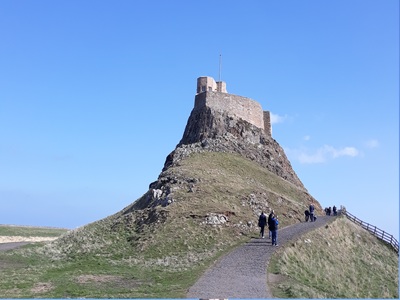