A short half-hour walk through some interesting paths near Roslin village, south of Edinburgh

A large car park, a river, a castle, the Chapel that is supposed to hold the Holy Grail and plenty of history to make this an interesting walk. Rosslyn Chapel has a cafe inside and Roslin village pub is very close.

For Satnav, the nearest postcode is EH25 9PX
From the Edinburgh Bypass, take the Straiton turnoff, the A701, and head South towards Peebles. Travel down this road for about a mile, then take a left hand turn for Roslin on the B7006. In Roslin village, this road bends round to the right, then after about 300 yards, bends right again. On this corner you will be a left hand turn for Rosewell. Take this switchback road down the hill, then immediately after a river bridge you will see a sign on the left for Roslin Glen country park. Turn in here and you should find ample parking.
Note the closing times at the entrance, in the Winter months this car park closes at 5, and at 8 in the Summer and the gates are padlocked.

A short walk which involves a lot of steps and climbing. You can see a map of the route here.
Starting from the carpark, head down towards the river and find the iron footbridge. Cross over this bridge and head up the hill. You will see Rosslyn castle ahead and on your right. After maybe 200 meters you will see that this path goes under a large stone archway, but take the steps up the hill instead. At the top of the steps you will reach the road to Rosslyn castle. You can detour right and take in the views from the bridge to the castle, but you want to go left, up the hill.
A short way up the hill you will see a stone seat beside a stone wall with a tree growing through it. This is all that remains of two cottages that used to stand there. Keep on going, and the roadway then runs between two old graveyards. There is a 'T' junction at the end of this bit of the road.
The roadway goes right, and the Rosslyn Chapel of 'the Davinci Code' fame is just a 5 minute walk up there, complete with a cafe. However we are going to turn left, where the roadway quickly becomes a footpath. The current Rosslyn Chapel was built by William St Clair in the 15th century, but the original chapel was built on lower ground, in the old cemetery that is now on your left. You can still see two of the original stone butresses at the end of the graveyard.

Follow this footpath right along, between the wooded riverback and a field on your right, and you will eventually come to some steps which lead down to a fenced footpath which runs alongside the road for a short distance, then turns off left and goes down a long stone staircase back to river level. After a short walk on the level between the river and a sewage works, you will come back to the road again. There is no fence on the footpath here, so dogs are best put onto a leader.
You cross the river again by the road bridge, then almost immediately turn left down a short flight of steps back to the river bank. Follow this path and you will be back at the car park again.

A longer walk with less climbing. You can see a map of the route here.
Head out of the car park back to the road and turn right over the bridge. After about 200 yards the road makes a 180 degree sharp right turn. On the opposite side of the road, right on this bend there is an old road or railway, now a footpath. Follow this roadway right along for some distance until it goes up and down a short hill to a bridge over the river. One the right hand side you will see a broken dam which provided the water power for the ruined buildings on the left.
Just before the bridge there is a small entrace in the wall that leads down to a ruined mill building. Go down this path and you will find a large gravel bed by the river, ideal for dogs to play in. Once they have played enough, follow the path down river and over across a small bridge that crosses the dried out mill race.
The buildings over the bridge are the remains of old gunpowder workings and have double walls to protect the workers from potential explosions. Continue to follow the path up from the river, when you rejoin the roadway above and can return back to your car.

If you would like a longer walk, cross the first bridge over the river and follow the path up some steep steps and eventually you will reach an old railway track. You can follow this track all the way to Penicuik.

The longest walk which involves some very steep climbs on rough paths. You can see a map of the route here.
This walk starts the same as Walk 1, over river by the iron bridge, but once over the bridge, follow the path up the hill, then go under the archway below the castle and down to the river. Turn left at the river and follow the path through the meadow, crossing the swampy areas on the walkways provided. At end of the meadow the path climbs some steep steps, then goes up into the woods on the riverbank. The path climbs up, then down again to another swampy area then climbs up a quite steep stoney hill.
At the top of this stoney slope you will see a triangular shaped earthwork on the left hand side. If the leaves are not too dense on the trees, you can stand on this earthwork and look back over to the castle. The earthwork was built by Cromwell's men for their cannon, which they used to destroy the castle.
Continue along the path, keeping to the right, until you reach a beech wood with a line of yew trees. At the end of this wood, turn left and follow the path upwards between the woods and a field for a short way, then turn left again towards some ruined walls. Above these walls you will see two very old and very large Spanish Chestnut trees. Continue along the path and climb through a hole in a wall and you will reach a trackway.
Turn right at this trackway, uphill and follow it around, past a caravan park and past Rosslyn Chapel. Walk past the old coach inn beside the chapel, then turn left down the hill. At the bottom of the hill, turn left again and follow the track between the graveyards and down to the castle. Just before the bridge to the castle, you will see a path leading off to the right. Go down here, down some steps and you are back to the bridge over the river and to the car park.

You can extend this walk in various ways. It is possible to walk right around the castle by the river. where the river curves round the castle grounds, you will see the rocky waterfall that gives ross lyn its name. There is a strange archway carved through the rocks beside this waterfall.
At the bottom of the stoney slope mentioned above, there is a pathway that turns off to the right and goes down to the river. This one is not for timid people as the pathway is steep and runs by steep slopes down to the river. Follow the path down river, at places it is badly worn but passable. After a while you will see a gravel bed about 5 feet below the path. Near the end of this bed, on the other side of the river, there is a small bay in the cliff about 10 feet above the river. You should see some pre-historic rock carvings on the rocks. Not much further, there is a path on the left that takes a very steep climb back up the river bank and will bring you out at the beech / yew wood mentioned above. 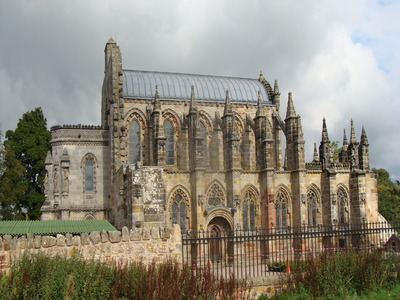 The prominent features on these walks are Rosslyn Castle and Rosslyn Chapel. The first castle was built about 1400 by the Sinclair family, who came from France and have held Roslin since 1280. The castle was damaged by a fire in 1452 then badly damaged again by the Earl of Hertford, who burned the castle during the Henry the Eighth's War of the Rough Wooing in 1544. The castle was rebuilt but was bombarded again by the artillery of General Monck, Cromwell's commander in Scotland, in 1650. The upper story was restored in the 1980s and is now rented out as a dog-friendly holiday home by the Landmark Trust.
The castle is said to be home to a sleeping lady who will one day wake up and lead someone to the whereabouts of a fabulous treasure.

Rosslyn Chapel was made famous by the 'Da Vinci Code' film and probably needs no introduction. It is possible to combine a walk with a visit to the chapel, to see the famous apprentice's pillar. What is less well known is that when Sinclair came back from the Holy land, he built his first chapel lower down the hill, but the land proved to be too boggy. The remains of two pillars can still be seen in an old graveyard. Could this be the resting place of the Holy Grail, and will the Lady of the Castle reveal her secret one day?

The North Esk valley was a hive of industry until recent years, with water providing the power to drive its machines. Roslin Glen car park is built on the site of an old linen works, the remains of some of the washing basins can be seen near the river. Walk 2 takes you up by the old Roslin Gunpowder mill, which provided much of the gunpowder for the Navy in Britain's wars in the 18th and 19th centuries.