The walk starts in the centre of Loanhead, just south of Edinburgh.

A walk through woods and along an old railway line.

For Satnav, the nearest postcode is EH20 9AA. This is for Church Street, just by the parking spot.
From the Edinburgh bypass, take the A703 turn off for Peebles, then just after you leave the bypass take the left hand B702 road to Loanhead. Follow this road right through the town to the crossroads at the end, turn left at the lights, then sharp right . Follow this road for a hundred yards or so, then sort of go straight on past the church (the main road turns left here). Just up this road, Church Street, you will see iron gateways on your left, the entrance to a cemetary. Go into here and park by the road.

The first part of this walk is definitely OK for a wheelchair. You can see a map of the routes here.
After parking, head back to the gateway entrance, where you will see a path leading down the an old railway line. Go down here and follow the railway walk right over the metal viaduct which crosses Bilston Burn. 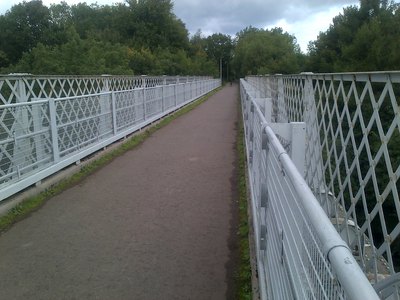 If you are disabled, or maybe just not a confident walker, keep on going along the railway walk, which eventually takes you into Roslin village, and turn back when you have had enough.
For a better walk, just past the viaduct you will see a pathway to your right. Take this path and follow it through the woods and along the top of the Kill burn, 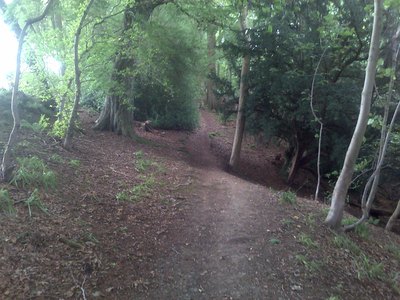 right along until you come to a broader path which runs past a walled garden. Just before the garden you will see the remains of an old ice house on your right.

The field on the other side of the Kill Burn is Shinbanes Field, mentioned in the history below

Turn left at the trackway, and follow it up through the narrow strip of woods until you come to a roadway. This brings you out at Mountmarle farm, which is the Midlothian Animal Breeding Research Centre. On the corner here you will see a monument dedicated to the battle of Roslin. 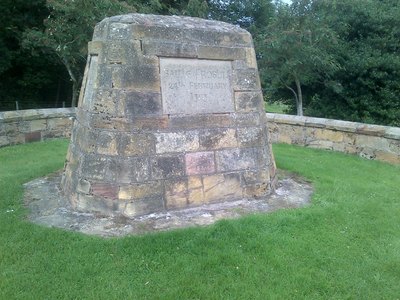 Turn left and follow the road through the farm, until you see an entrance that takes you back onto the railway walk. Turn up here and follow the old railway line back to your car. 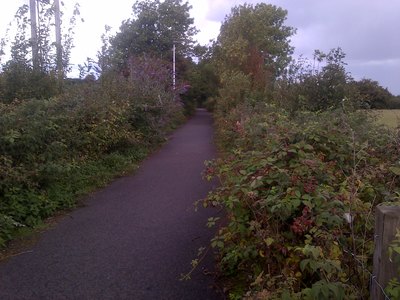 You have a lot of other options for walks in this area. If you take a right path before the viaduct, this takes you through the Bilston Glen colliery site, where there are numerous paths round and over the old soil heaps. Some of these paths eventually join up with the route above.

❮ ❯
The path above the Killburn

The railway line once ran from Edingurgh to the outskirts of Penicuik, and services ended past the viaduct in 1969, when Roslin colliery closed. The viaduct is quite impressive, as the central metal span is 330 feet long. As it is made from metal, it expands and contracts with the weather, so the whole span is carried on pairs of cast iron roller bearings. Bilston Glen Colliery, a relatively modern pit as it was opened in 1961, kept the north side of the line open until 1989 when that colliery closed too.

Near the far end of this walk, you pass an ice house sunk into the bank of the Killburn, and just past the ice house you see a walled garden, now a plant nursery. These would once have belonged to Drydenbank, a mansion house from the 19th century. This house had to be demolished in the 1930s, as it was undermined by coal working. Dryden Tower and Dryden Farm are also the remains of what was once a large estate.

As you come out of the the strip of woodland leading up from the walled garden, you wil see a monument to the Battle of Roslin. This was a Scottish victory in the First War of Scottish Independence in 1303. To put it into historical context, William Wallace was victorious at the battle of Stirling Bridge in 1297, then lost heavily at Falkirk in 1298. The English then controlled much of southern Scotland until they were finally driven out after the battle of Bannockburn in 1314. So the battle of Roslin lies right in the middle of this tumultuous time.
'Serious' historians tend to downplay this battle, describing it as a Scottish victory over an 'English reconnaissance party' lead by Lord John Segrave. They agree that Segrave split his forces into three, and that each force was defeated piecemeal, but downplay the numbers involved. What we do know is that in August 2019, two metal detectorists discovered 200 silver coins underneath a tree on the site of the Battle of Roslin, and while firm conclusions have not been drawn about them, they are most likely to have been payment for mercenaries who took part in the battle.

The legends say that after Edward Longshanks regained control of Southern Scotland at the battle of Falkirk, he made Sir John de Segrave its governer. He fell in love with Lady Margaret Ramsey of Dalhousie, but she was having none of it and ran off with Henry St Clair, Lord of Rosslyn. When Sir John heard of this and her plans to marry Henry, he got permission from Longshanks to invade Scotland and take Margaret back. He marched north with 30,000 men and split them into three parts, with one part attacking Borthwick Castle, one part attacking Dalhousie Castle and he led the division to Roslin. Here he was met by a Scottish force of 8,000 men, led by John Comyn. Ambushed between woods and the deep ravine by Roslin, the English army was slaughtered and Segrave captured.
Comyn then lead his troops to Dalhousie, and ambushed and slaughtered the English division there. Finally, the Scottish army took on the third English division, which had been at Borthwick Castle, met them at Mountmarle, and slaughtered them too. It was said that of the 30,000 English troops, less that 2,000 survived.
Some accounts have William Wallace involved in this battle, but not as leader as he'd lost confidence after Falkirk.

It's impossible to know now exactly what happened, but there are inconsistencies in the account above. Why would Segrave need to ask Edward I for permission to invade Scotland when he was the Governer? Why would he invade at all, when he would have had forces in Scotland already. Dalhousie lies between Borthwick and Roslin, yet the account has the Borthwick force meeting the Scots at Mountmarle, at Roslin. Segrave remained the governer of Scotland and fought with Wallace the following year, then escorted Wallace down to London for his execution a couple of years later.
On the other side, place names in the area like 'shinbanes field' 'The Hewing Bog' and maybe 'Kill burn' do indicate a lot of lives were lost in the area. Once account says that 35,000 men died in the battle, from a total of 30,000 Englishmen and 8,000 Scots. These numbers don't really add up if only 2,000 Englishmen survived.

None directly, but pubs and cafes nearby in both Roslin and Loanhead.

Douglas Kyles -       18/5/2021 15.57
Not sure the directions are right. You turn left just after the ice house to get to the battle of roslin monument, if you turn right you end up at the remains of a bridge over the Kill Burn, or out on the farm road back to the main road into Roslin.