Blairadam Wood is a Forestry Commission site in Fife, near Kelty

A Woodland walk. Some of it is Forestry Commission Sitka Spruce plantations, dark and sombre, while others is open green beech woodland. Every now and again, you will see a glimpse of old brickwork in the undergrowth, or a railway embankment in the trees, legacies of the area's industrial past. Many of the walkways are disabled friendly. The walk as described is about 4 miles, and involved some rough walking, but there are other, easier options described on the Forestry Commission map.

For SatNav, the post code is KY4 0JQ.
Leave the M90 at junction 4, Kelty, and take the left turn off (heading North) signposted 'Scottish Vintage Bus Museum' on the B914. About 500 yards down the road, take the right turn signposted 'Blairadam Forest' and follow this road for half a mile or so to the car park.

You can see a map of my route here.
Blairadam wood is a maze of good forestry roads, OK forestry roads and a wean of small paths that wander off into the forest. The Forestry Commission has marked out 4 trails through the forest, and a map of these is available. It's a bit difficult to describe the route I took as I frequently wandered off trail and scrambled down steep banks and over streams to reach another path seen through the trees. If you like rough walking and are confident in your ability to find our way out of a forest, try it, but you are responsible for your own safety. Otherwise, get hold of a trail map and follow a marked route.

Go through the gate at the car park into the forest, then turn left on a small path. The basic idea was to head west for a while, with the sun on my left. This path joins a forestry road after a short way, so keep left along the road. It turns out this roadway goes a long way west, but after a while you will see another road a short distance on your right. Find your way through the trees to this road, then keep left on it. This is now the red and yellow walking routes. After a while the red route splits off to the right. Continue with the yellow route westwards, then it bends to the right and crosses two burns on stone bridges. Just after the second bridge, over the Pieries burn, the yellow route turns right again, but I went left and followed a roadway further west and north then straight uphill over a crossroad. After a while I decided I'd gone far enough and turned off east, with the sun on my right, and followed that road for a while until I came on an old trackway heading south east (in the direction of the car park, I hoped). This was a pretty walkway through a beech wood.

At some point here I came back to the yellow route and followed it back round to the bridge over the Pieries burn, then retraced my steps back to where the red route split off. I turned right onto the red route and followed it eastwards along the Kelty burn. It eventually turns south and brings you back to the car park.
I suspect you could visit this forest a dozen times and follow a different route each time. 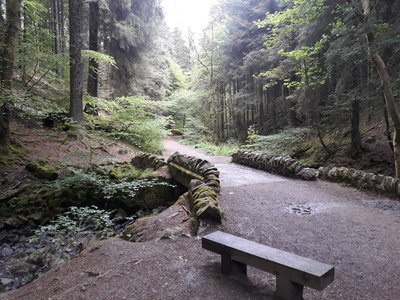 Some of the land on which Blairadam stands was bought by the Scottish architect, William Adam, in 1733. At this time the estate was open moorland with one tree, a large ash tree simply known as 'The Tree'. William Adam built Blairadam house and landscaped the moor, planting lots of trees. This planting was continued by his son John and his grandson William. The second William Adam planned to deveop an 'adorned estate', which would combine commercial timber with ornamental trees, a philosophy which is still evident today.

The monks of Dunfermline dug coal from the land in the 13th century from shallow pits in the sides of the burns. You can see some evidence of this on the sides of Pieries burn. One reason William Adam bought the land was to exploit the coal seams. At first, there was one coal mine at Loutenstane Wood, but as time went by, more mines were opened out and trees were felled for the mines and the railways that served them. A bridge, called the one hundred foot bridge, was built over the Kelty burn and you can still see one of the tumbled brick pillars from this bridge by the side of the red path.
At first, it seems there is no trace of the areas industrial past, but as you walk through the forest, you will see the remains of railway embankments through the trees.

As you reach the end of the walk you will see a short brick wall by the path, the side of a former railway bridge. There is a beast carved on the bricks and some writing engraved on the side of it, which says 'touch not the cat'. This inscription relates to the legendary Beast of Blairadam. A large black cat has been spotted several times in the woods, bigger than a labrador. People think it is a puma but no-one has managed to get a photo of it yet to prove it. Apparently, big cats are often spotted in Fife. Unfortunately I found this out after the walk, so I did not look for yellow eyes watching me from the undergrowth, or for large paw prints in the mud. Next time maybe.

There is a wonderful poem about the beast, written by Jim Douglas who was born and brought up in Kelty. Here are some extracts from the poem, the Forestry commission publish the full version.

There's a beastie at Blairadam
And some day ah will nabbum,
For ah'm the keeper there yeh see,
And when roamin' in the gloamin'
And tae ma hoose ah'm homin',
Ah sometimes think that he is followin' me.

But ma sergent looks like Saddam
And he's sent me tae Blairadam,
Even tho' he kent ah wisnae keen.
And efter aw that trainin'
Ah'm back here and it's rainin',
And think ah see a pair o' yelly een.