Mugdock Park has castles, tea rooms, lochs and loads of paths joining them together.

For SatNav, the nearest post code is G62 8EL.
Heading north out of Glasgow, take the A81, through Milngavie and heading for Strathblane. About 3 miles out of the city you will see a left hand turn, signposted Mugdock Country Park and Garden Centre and Walled Garden. Turn in here and follow the round round, turning right at the 'T' junction the up to the main cark park by the Garden Centre. Mugdock has several car parks, but this one is near the cafes.

You can see a map of the route here.
Mugdock is a maze of paths and roadways. This walk passes most of the features, but you have lots of other options to explore if you wish.
This walk starts at Caulders Garden centre, but you may have problems taking your dog in there. 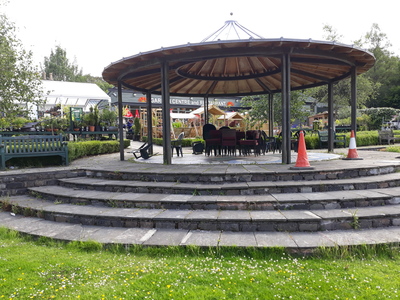 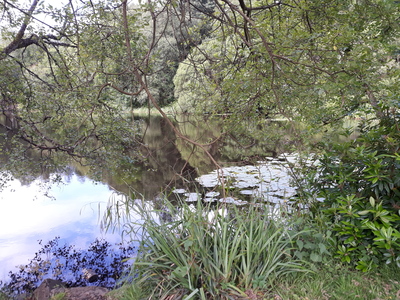 Now turn right along the top of the loch and go down its left hand side to the bottom, where you will see a path over fields. Follow this path for some distance until you reach Mugdock loch, and follow this loch down the left hand side. 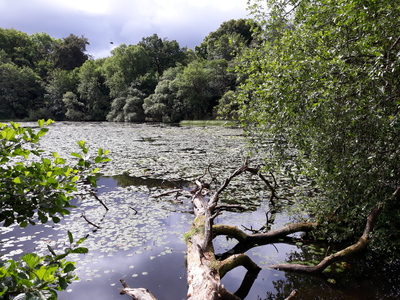 At one point you need to take a detour round a small burn. Near the bottom of the loch you will join a roadway that leads past Mugdock Castle. The castle is an open ruin and is well worth a bit of an explore. 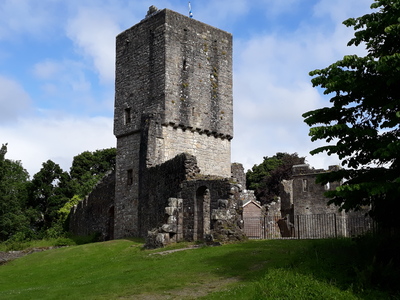 When you've seen the castle, rejoin the roadway, and follow it past the WWII AA Gun emplacement almost to the East car park. Turn right just before the car park and follow another path up towards Craigend Castle. 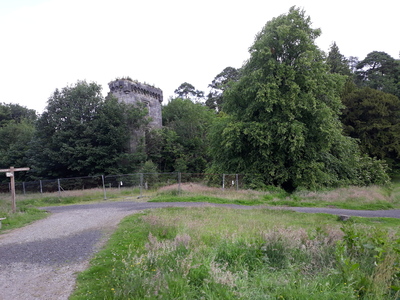 This castle is securely fenced in and cannot be accessed. Now you are back to a roadway again. Follow this roadway up to the cafe block and have a well earned coffee. 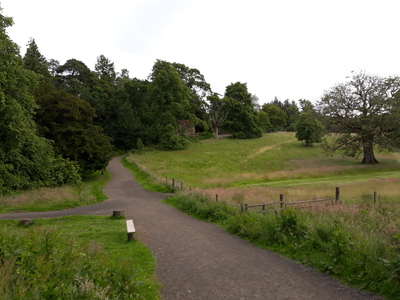 You can sit outside with your dog, or the cafe in the corner used to be the elephant enclosure when this was a zoo. Now follow the road on past the cafes and you will come back to your car.

Please page or swipe round the images in the gallery. 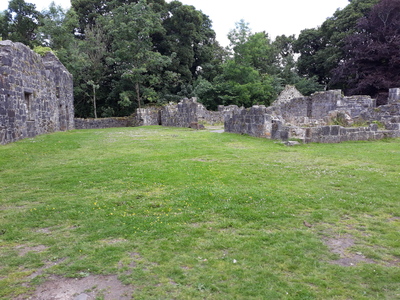 The Dumbartonshire area of Scotland was once at the northern edge of the British kingdom of Strathclyde, and the earliest probable reference to Mugdock was a batte in 750 between the Picts and the Britons. The Annals of Ulster and the Welsh Annales Cambriae record that Talorgan, the nephew of Unust the King of the Picts, died at Mocetauc. The name Mocetauc may well have morphed over the years into Mugdock and the location makes sense, near the boundary beween the British and Pictish kingdoms..

Clan Graham built Mugdock Castle in the late 1300s and made it their stronghold.The castle was sacked in 1641 by Archibald Campbell, the 1st Marquess of Argyll, while it's owner was imprisoned, sacked again in 1645, then rebuilt as a mansion house. The mansion house burned down in 1966, and is a ruin today.

Craigend 'Castle' was actually a country house built in the early 1800s. It was eventually bought out by a businessman from Glasgow, Andrew Wilson who opened a zoo in the stable block with his son William in 1939. The zoo boasted that it had the biggest elephant in captivity. It also had two cigarette smoking chimps (imagine the fuss if anyone did that today!), and a group of performing lions. While the zoo did very will initially, with 37,000 visitors on the first day, it fell victim to a series of bad Scottish summers and the rain and winds kept the visitors away, then the local transport company withdrew the bus service from Milngavie to Craigend as it was operating at a loss.. A couple of incidents with children getting scratched by the big cats were the final straw, and the zoo closed after 5 years. The country house is now a ruin and the stable block zoo is now cafes and a visitor centre.

So, what happened to Charlie the Elephant? He had an amazing story. He was born in the wild in southern India, but his herd was captured by hunters when he was 5 years old. Charlie was too young to sell, so he was adopted by the village children, then eventually became a star turn in a Chinese circus. This circus was in Singapore when the Japanese invaded, so Charlie became a POW and was put to work clearing trees. After the war, he made his way to Scotland, and became the star attraction in the zoo. When the zoo closed, all the animals were sold except Charlie. He weiged 6 tons and stood 10 ft tall, so moving him to another zoo was a problem. He was costing £20 a week to feed, which was a fortune in those days, and the Wilsons reluctantly said that he had to go.
One business man offered to buy him and slaughter him for dog food. Singh Ibrahim, Charlie's handler, was supposed to have told this businessman, ''You shoot Charlie, I shoot you!''. Singh Ibrahim was fond of a pint and used to walk Charlie down to his local, the Woodlands bar. One day, Charlie got bored waiting for Singhn to drink up and tried to go into the pub to fetch him, demolishing the doorway in the process.
A newspaper campaign was launched and food and money poured in to keep Charlie alive. Tarzan himself, or at least the movie star Gordon Scott, donated £100 to the fund. Charlie was rescued by Billy Butlin and moved to the Butlin's holiday camp in Ayr. Charlie eventually passed away and his stuffed body in now in a Brazil museum.
Quite a life for the little elephant from the jungle.