The Location
Lindisfarne is a tidal island about 13 miles south of Berwick-upon-Tweed.
*** WARNING *** Lindisfarne, or Holy Island, is a tidal island and is cut off from the mainland for about 4 hours at high tide. Please don't try to cross when the causeway is underwater as cars and vans do get stuck and the occupants have to seek safety on the refuge tower. Northumberland council provides a chart of safe crossing times here . Please allow plenty of time for your walk and then time to get back over the causeway. ***

What's there
An easy to moderate 2 or 4 mile walk around an island, with an old Priory and a Castle on route. Holy Island village has a couple of cafes and a visitors centre. Parts of the walk are suitable for disabled access.

How to get there
Postcode for Satnav - TD15 2SE. This is the post code for the first houses in the village. The public car park is about 100 yards before them.
The turn off for Holy Island is about 9 miles south of Berwick-upon-Tweed, clearly marked with both green road junction signs and brown tourist signs. Turn off the A1, head down the road to the sea, then over the causeway. Once you reach the Island itself, the road runs between the high water mark and the dunes for about another mile before you reach Holy Island village. You will see a number of free parking places on your left as you drive along, then just before the village you will see a large carpark on the left. This one is a pay park, costing £2.50.

The Walk
Click here to see a detailed OS routemap of the walk. It will open in a new tab.
Assuming you start out from the main car park, head into the village, turn right at the 'T' junction, then sharp left down Crossgate lane towards the ruined priory. Here, turn left for the beach and follow the beach path past the fishing huts and right round to Lindisfarne Castle. This roadway bears left past the Castle and follows the beach northwards. Just inland from the castle you will see a walled off area over the grass. This is the Gertrude Jekyll garden and is well worth a visit. After about another 250 yards you will see a pathway on your left called 'Crooked Lonnen', which leads back into the village and so back to your car.

For a longer walk (and remember that incoming tide!) continue along the beach path until it bears left and heads away from the sea again and round by a 'lough' or small lake. You can then follow paths round the edge of the links and back to the road, where you walk back towards the village and your car. This longer walk is about 4 miles and might take 90 minutes, without any stops on the way.
If you need to get back to the main car park and don't fancy walking along the road, there is an alternative pathway that runs right down the middle of the island, between the road and the coast.

Lindisfarne is so rich in history it is difficult to know where to begin. The ancient Britons doubltess revered it as a place that was halfway between the land and the sea. While it is well north of the Roman wall, the Romans knew it as Insula Medicata, named because of the medicinal properties of the plants that grew there. The native British people of Brynaich altered that to Ynys Medcaut. When the Romans left, the Island was colonised by the Angles of Lindis, which led to the name Lindisfarne. Urien of Reged, one of the great British leaders against the Anglo-Saxons, was killed while besieging Ynys Medcaut. He was apparently killed by one of his fellow Britains, hence some people like to associate him with the legendary King Arthur.

Later, the Angles were established in the area and created the kingdom of Northumbria. When his farther was killed, Oswald fled to Iona in Scotland with his family and was converted to Christianity. After a while he was able to take his father's kingdom back and in 635 he summoned an Irish monk called Aidan from Iona to be his bishop. One of Oswald's royal palaces was at Bebbasburgh (Bamburgh), so Oswald granted Lindisfarne, just 6 miles up the coast, to Aidan and his companions on which to found a monastery. The Kingdom of Northumbria was then at the height of its power, so the monastery prospered.
A monk called Cuthbert joined the monastery sometime in the 670s and he eventually became Lindisfarne's greatest monk-bishop and an important saint. Cuthbert was uncomfortable around women as he considered them to be the cause of the original sin. To keep himself pure, he initially lived as a hermit, first on St Cuthbert's Isle, just offshore from Lindisfarne, but then to the remote island of Inner Farne. Once he was made bishop in 685 he had to rejoin the wider world, but he developed a considerable reputation as a pastor and teacher.

When Cuthbert died 2 years later in 687 he was buried in a stone coffin inside the main church on Lindisfarne. The monks opened his tomb 11 years later and discovered that Cuthbert's body had not decayed. This, they said was a sign from God that he was a holy saint, so they put his body into a coffin-shrine, which pilgrims could visit. The monks and pilgrims reported that several miracles happened around the shrine, so the cult of St cuthbert spread and Lindisfarne became the major pilgrimage centre in Northumbria. This in turn meant that the monastery grew in power and wealth, not just from the pilgrims, but also with gifts of money and precious objects. from kings and nobles. While the power of Northumbria was waning by the 6th century, Lindisfarne was rich and learned enough to produce the Lindisfarne Gospels in about 720, a real masterpiece of early medieval art.

Unfortunately, the news of the riches of Lindisfarne spread too far, and on 8 June 793 The Vikings launched their first big raid south on the monastery at Lindisfarne. The monastery was burned to the ground, the monks were killed, the treasures of the saints carried back to Norway. As someone prophetically wrote at the time, "What assurance can the churches of Britain have, if St Cuthbert and so great a company of saints do not defend their own?" The surviving monks fled inland, carrying St Cuthbert's coffin and those treasures that survived the raid, leaving only a small community behind to carry on the Christian tradition. St Cuthbert's bones eventually ended up in Durham Cathedral, where you can see his tomb today.
The Prince-Bishops of Durham re-established the monastery on Holy Island sometime in the 12th century, and it became a place of pilgrimage again until it was closed down by Henry VIII in 1537.

Henry VIII was fighting wars in France, while keeping an eye on the Scots to the north, as France often invoked the 'auld alliance' by asking the Scots to invade and draw off some of the English army. Lindisfarne was vulnerable to attack by sea, so Henry built Lindisfarne castle in 1550, just after Lindisfarne Priory went out of use. Some of the stones from the priory were used to build it. It is quite a small castle, built on top of a whinstone outcrop called Beblowe. The castle was only besieged once, when it was briefly captured by Jacobites in the 18th century.
With the Union of Crowns, the castle fell into disuse until it was bought by Edward Hudson, a publishing magnate and the owner of Country Life magazine in 1901. He decided to use it as a holiday home (as you do) had it refurbished in its current Arts and Crafts style by Sir Edwin Lutyens. The walled garden near the castle was originally a vegetable plot, and Lutyens had it redesigned and planted out by his friend and garden designer Gertrude Jekyll between 1906 and 1912.
Both castle and garden are now owned and maintained by the National Trust and are open to visitors. Dogs are allowed in the garden on a leash, but not in the castle, 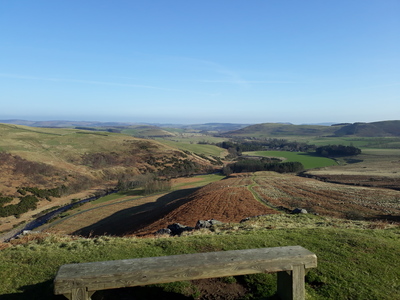 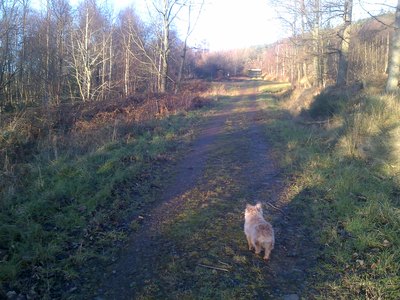